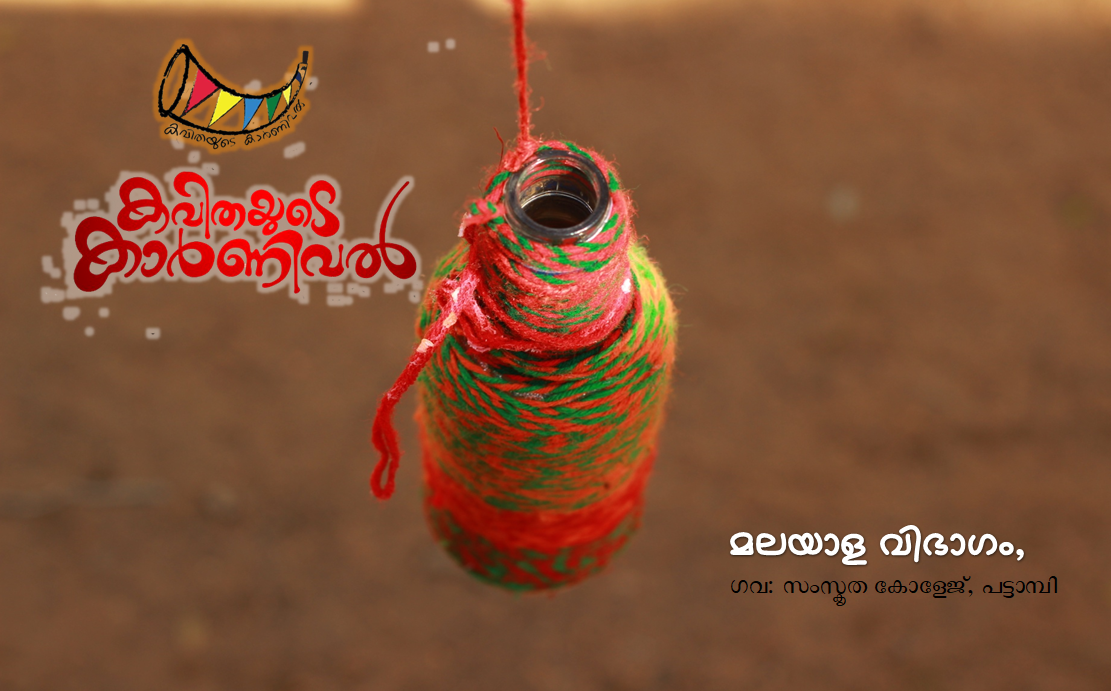 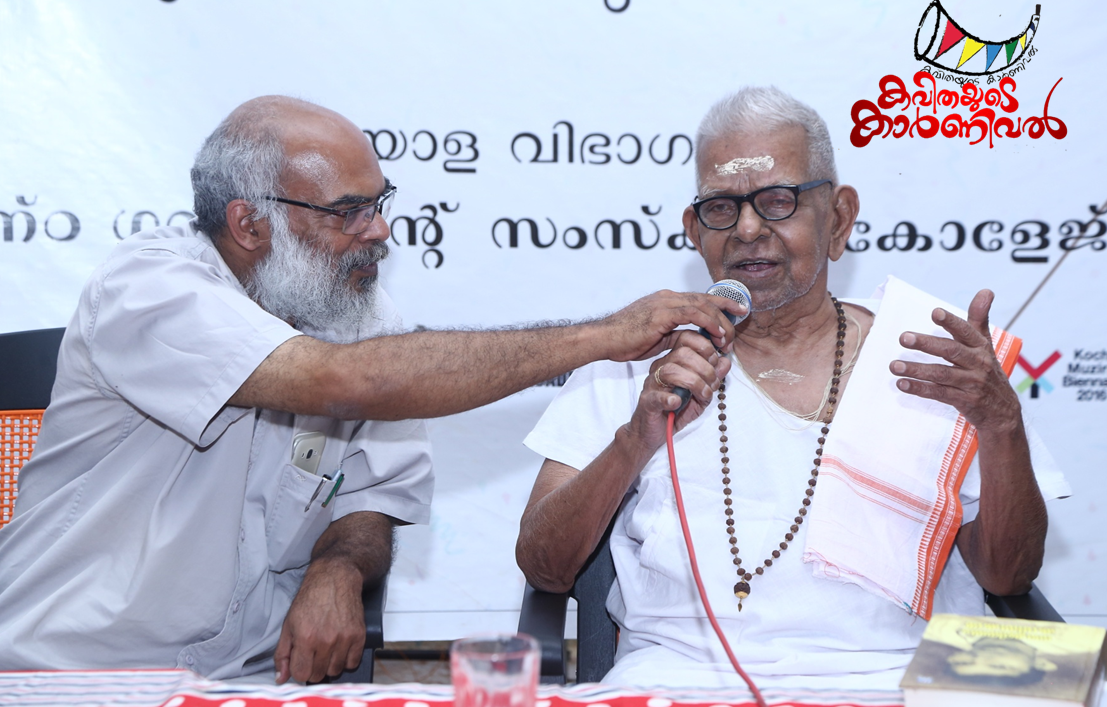 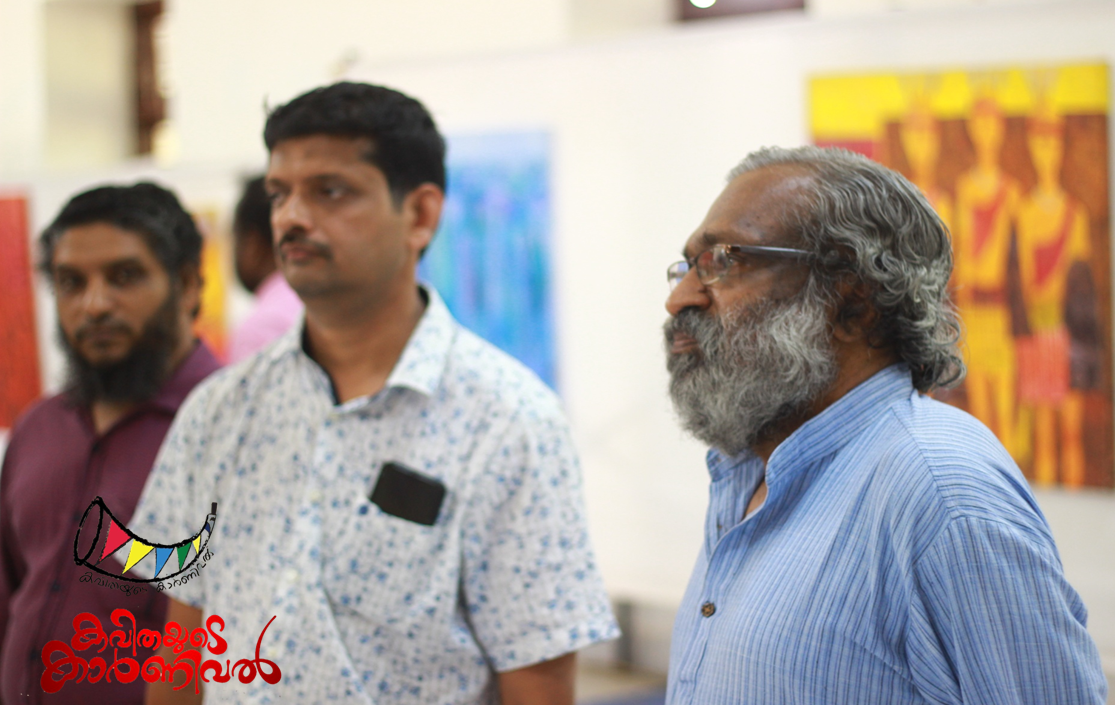 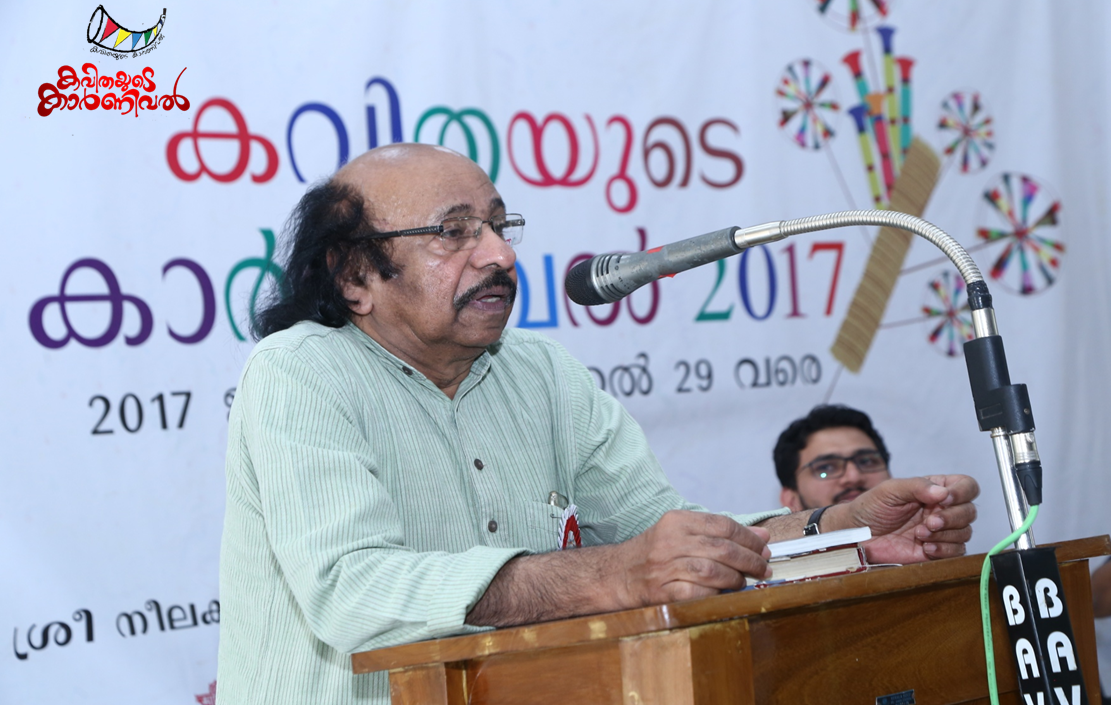 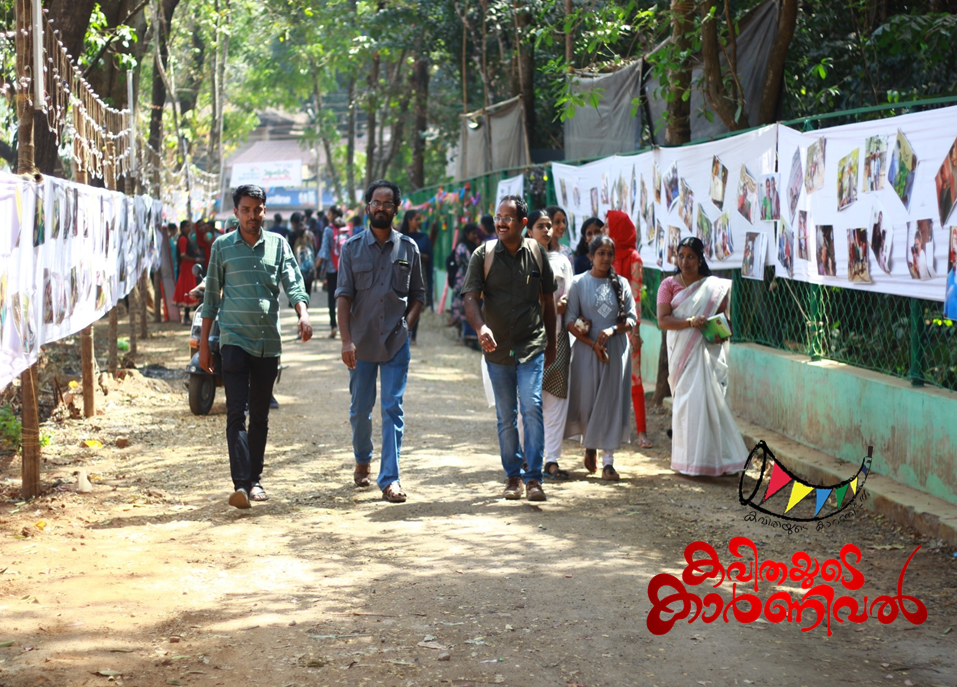 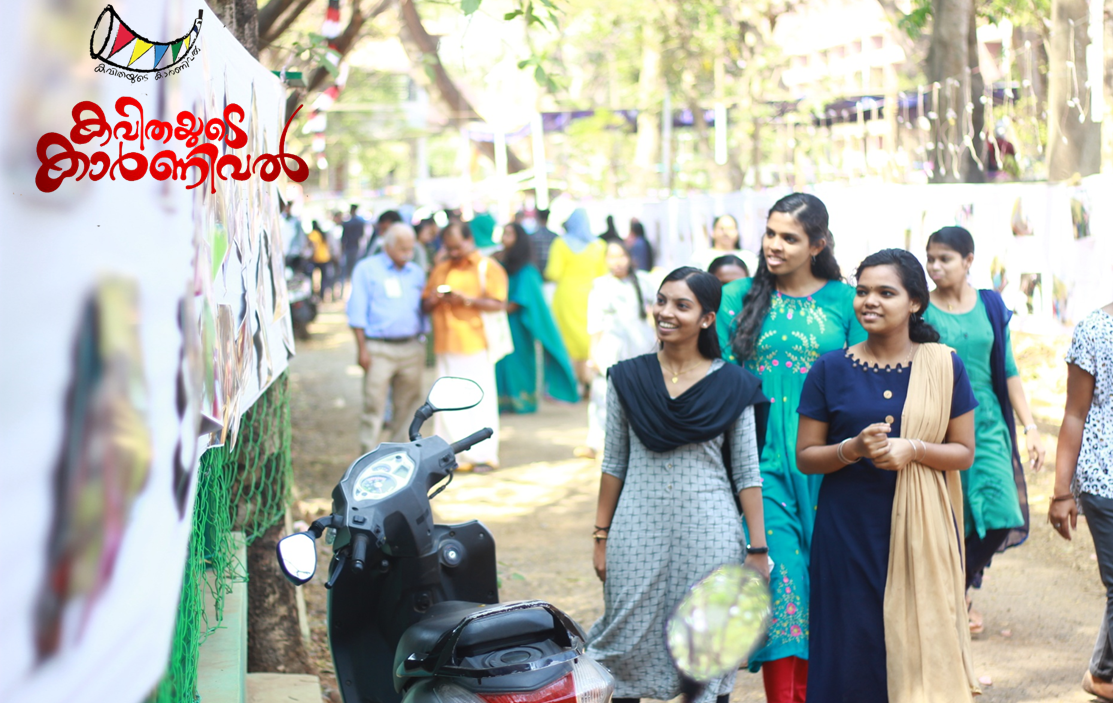 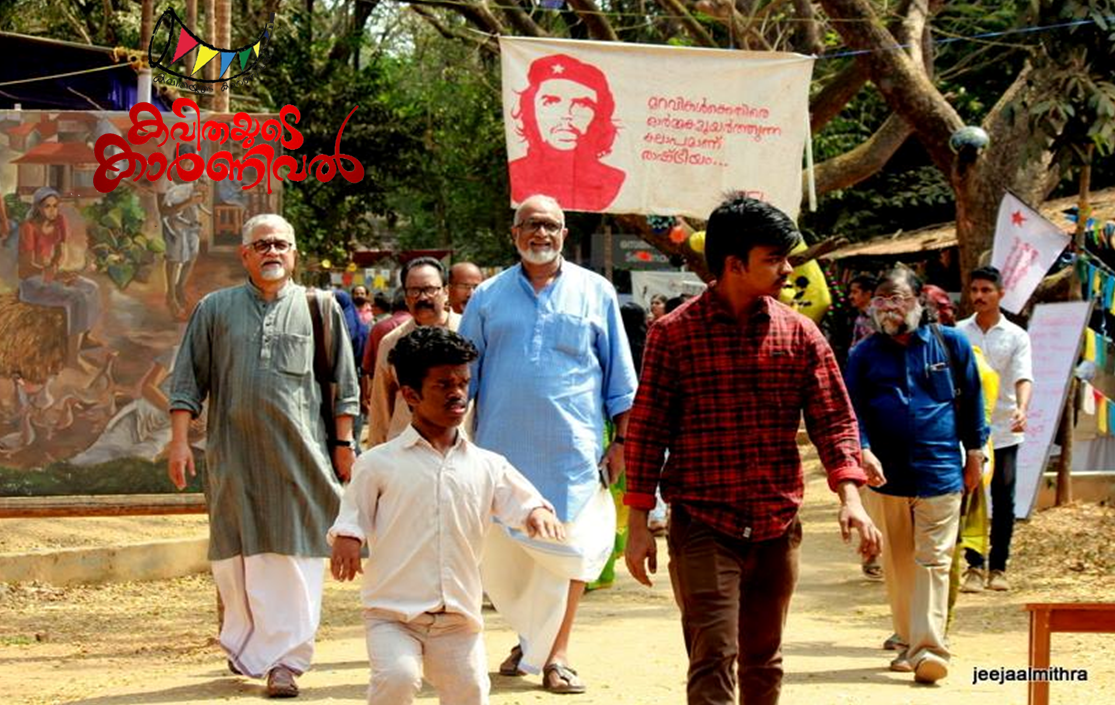 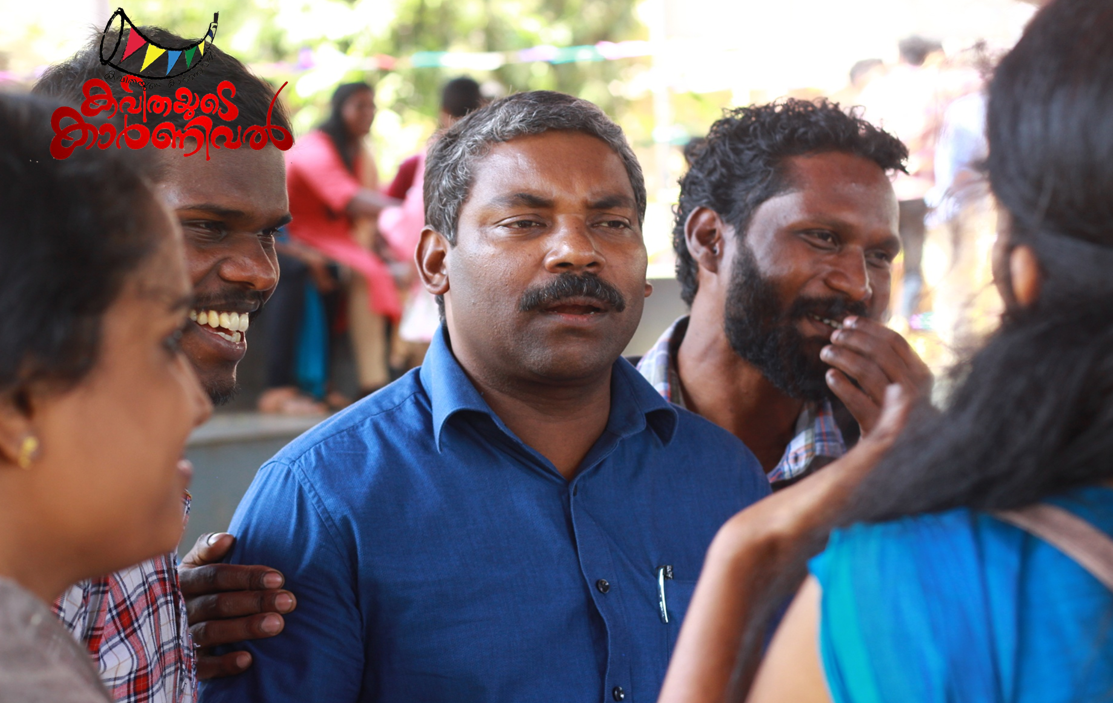 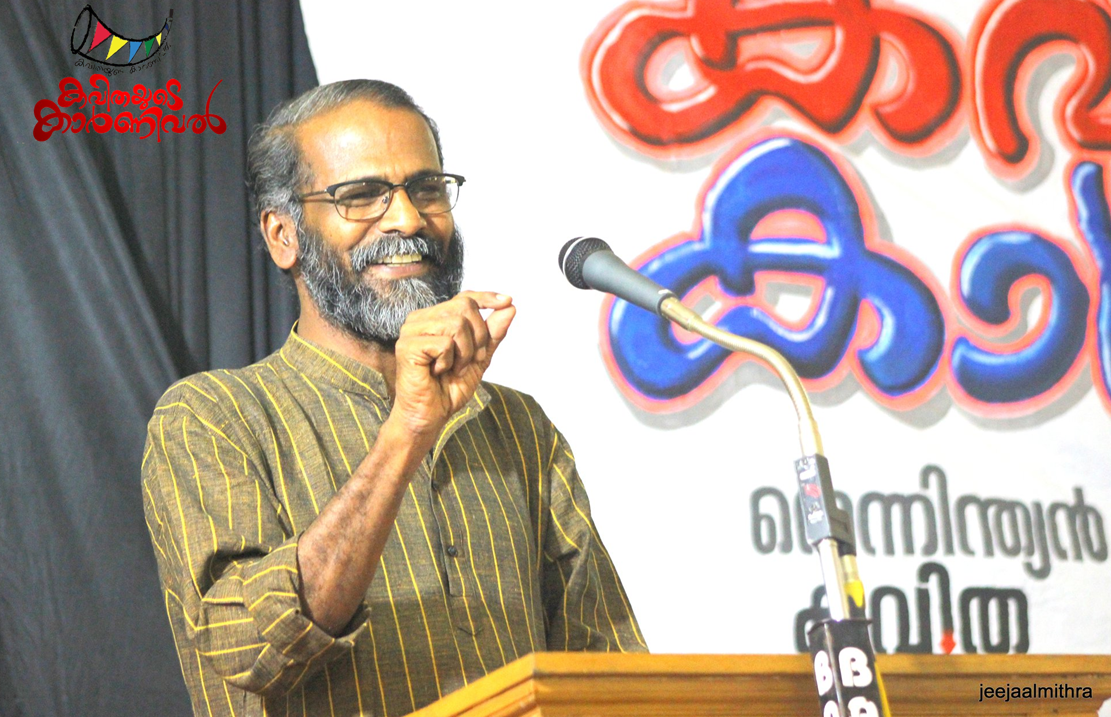 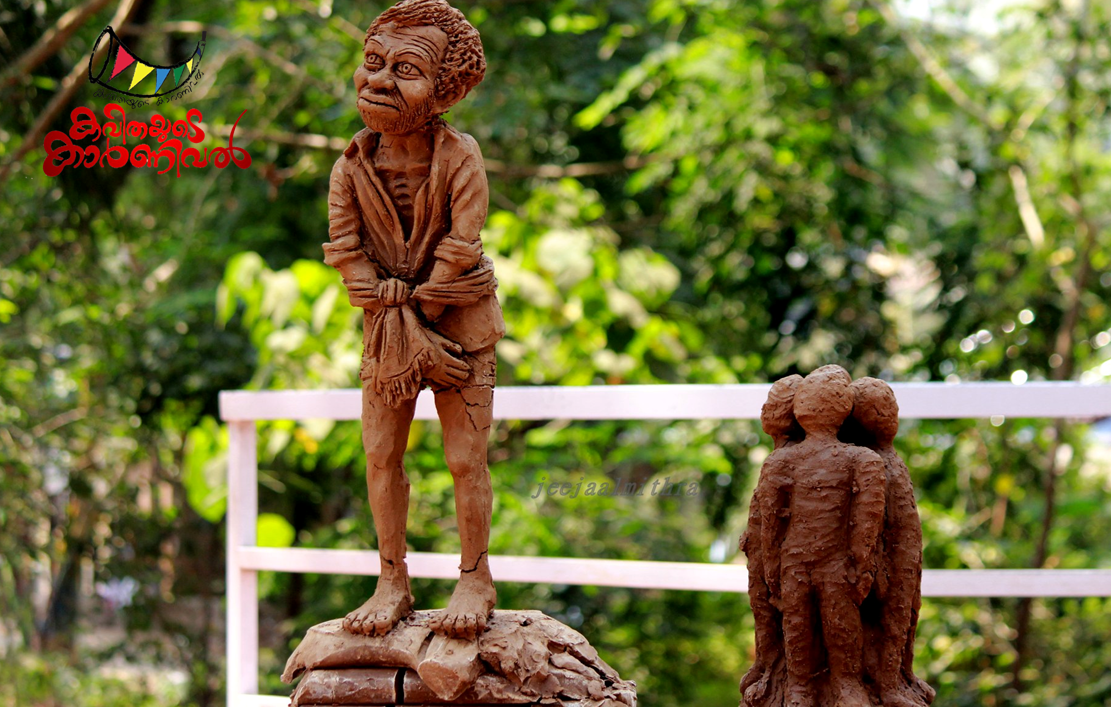 The First Carnival was organized in April 2016 by the Malayalam Department of Government Sanskrit College, Pattambi in association with the Malayalanatu Web Community and UGC. It was the Largest friendly gathering of Poets in Kerala recent times. The event was organized on the theme of 25 years of Modern Malayalam Poetry.

Along with the Veteran Poets Attoor Ravivarma, and K.A. Jayaseelan , New Poets like P.P Ramachandran, T.P. Rajeevan , P.Raman, S. Joseph, Savithri Rajeevan, Anwar Ali, K.R Tony, Rafeeq Ahammad  appeared in the field of Modern Poetry in the Nineteen Nineties and more than 200 Poets were came to the Three day Carnival.

A number of Seminars, Speeches, and Debates held on the general theme of 25 Years of  Modern Poetry. In addition to the academic seminars there were discussions, Speeches, book exhibitions, at different venues. The entire event is documented and stored in audio visual media.

The third edition of the popular cultural program ‘Poetry Carnival’ was entitled “Poetry: Resistance and Counterculture”. This year’s Carnival was a quest to forge from history, the subjectivity of Malayalam poetry as a language of individual and collective resistance against the myriad forms of power and oppression. It envisaged to bring the marginalized representations like folk songs, poetry on dalits, women and environment to the fore.

National Seminars, Poetry Readings, Debates, Meet the poet sessions, Installations, Art Exhibitions, Book launches and book fests, dance, music as well as live painting and sculpturing camps were a few among the highlights of this year’s Carnival, which was solemnized in five different venues.

The lecture series entitled “Writing and Resistance”, which examined the role of a writer and writing in times from Kerala Renaissance to the contemporary political uprisings against fascism, was organized in three days.

The Carnival also hosted two national seminars, along with other events, with the financial aid from the Department of Collegiate Education. The National Seminar “Counternarratives in Folk Songs” sought to explore the voices of resistance in the folk songs, that took form in different spacetimes starting from the casteist and feudal past of Kerala.

The second national Seminar was titled “Resistance and Counterculture: Milestones in Malayalam Poetry”. It sought to historicize the many attempts in Malayalam poetry, which captured the memory of resistance, struggles and socio-political movements, starting from Kerala Renaissance and Colonial Modernism.

Art and Resistance:  A three day live workshop for painting and sculpturing was also organized in the campus. It proclaimed the vital role of art and writing in troubled times to the Carnival audience.

Poetry Camp: The three day workshop for poetry was conducted with the co-ordination of Calicut University Union.

‘Focus’: Poetry reading session: A novel program was included in this edition of the Carnival. A session was designed with ten experts in poetry discourses assigned as curators. Each of them presented five young poets and their poetry.

Problems encountered and Resources availed: The three day cultural festival of Pattambi cost an expense of six lakhs every year, which was impossible to be met by the College, with the financial aid from the Department of Collegiate Education alone. Therefore the Carnival had been co-sponsored by Kendra Saihtya Akademy, State Cultural Department, Kerala Sahitya Akademy, Kerala State Council for Histrorical Research, several other governmental and non-governmental agencies, local self governing bodies as well as online collectives of Literature and Culture lovers.

As the College authority could not single-handedly manage the public participation, food and accomodation of guests and their travel, a People’s  Organizing committee was formed with the honorable MP of Palakkad, M.B. Rajesh as its patron, Pattambi MLA Mohammed Musin as Convenor and the Presidents of local self governing bodies in the vicinty of Pattambi as members.

The fourth edition of the Poetry Carnival was organized by the Department of Malayalam, SNGS College Pattambi with the co-ordination of the Department of Collegiate Education, from 23- 26 January 2020. The central theme of the Carnival was “Kerala/ Poetry: Redeemings for the Future”, in the context of the post-flood scenario and the movements for the redemption of the Renaissance ideals in Kerala. The Carnival has transformed into a cultural festival of not only the College, but that of Pattambi and even the reading community of Kerala. It is the fruit of the team work of all departments, faculty, staff and students in the College, as well as the local people and the well wishers of the event. P.P. Ramachandran was selected as the Programme Director of the fourth Poetry Carnival; Dr. H.K. Santhosh as the General Convenor and Dr. M.R. Anilkumar as the Convenor.

On 24th January, the Carnival was inaugurated by H.S.Sivaprakash. The poet and novelist Jayamohan spoke on the topic ‘Poetry is neither a vision, nor a fiction’. The Carnival special book was released by the popular Tamil poet Manushyaputran. The latter also took part in the ‘Meet the Poet’ session in that evening.

Stage 2 hosted a poetry discourse between young poets/readers and the veteran poet S.Joseph. Arangottukara Paadasala performed a visual narrative of select poems. Prasad Ponnani presented Gazal songs that night. The ritual art form ‘Mudiyettu’ was performed under the auspices of the Folklore Academy.

The two day Students’ Carnival was conducted in the venue near Botanial Garden. The camp for school students was co-ordinated by P.M.Narayanan, while that of College students was done by Assistant Prof. Rajitha P.V.

The College auditorium was transformed into an Art Gallery, to exhibit paintings of around hundred artists, including Shaji Appukkuttan, Premji, Anitha Kulathoor, Anto George, Sandra Soniya, Baijudev, Hriday etc on the general themes of flood and Kerala Renaissance.

The third day of the Carnival began with an interesting poetry reading session of tribal poets, moderated by the poet P.Raman. Asokan Marayur, Sukumaran Chaligadha, Divya K and Dhanya Vengachery were some of the presenters.

V.K.Subaida spoke to poet Anwar Ali in a ‘Meet the Poet’ session. M.B. Manoj, Sister Lucy, Bindu Krishnan, Sreelatha Varma etc discussed poetry in another poetry reading session. A poetry session of the differently abled Malayalam poets was organized, followed by the exhibition of the reading and writing devices for the visually challenged.

Kalpetta Narayanan took a class on poetry entitled ‘The Story of the Axe’. Kuzhoor Wilson took the session ‘POETREE’, regarding the installation of poetry. That night (25th January), in the venue in the middle of the college ground, the drama “Ore Bhoomi, Ore Nizhal”(Same Earth, Same Shadow) was staged on behalf of a huge audience.

Sree Neelakanta Govt. Sanskrit College Pattambi organized the fifth edition of Poetry Carnival with the co-ordination of the Department of Malayalam and the Department of Collegiate Education, from 23- 26 January 2020.This year’s Carnival was conducted with the tag line ‘South Indian Poetry 20/20’ in seven venues. Seminars, lectures, art exhibitions, poetry recitals, Discussion on Sufi Tradition, Musical nights, and drama were performed as part of the event. The carnival also hosted a workshop on Poetry translation, incorporating a wide range of south indian poets from Tamil, Kannada, Malayalam and Telugu.

The four day program was inaugurated on 23rd January by the renowned poet K.G. Sankarappillai and the chief guest of the event was Cheran, the Srilankan expatriate poet. Mia poet Shalim Mukthadir Hussain and poets like Kalpetta Narayanan, Selma (Tamil), P.N.Gopikrishnan etc spoke in different sessions. Sunil P. Ilayidom curated the poetry learning session. The renowned art critic and curator Suneet Chopra spoke on the topic ‘Installation Art in Contemporary Indian Context’. A seminar on cyber poetry and discourse on the presence of Sufi tradition in Malayalam poetry were held. A poetry installation of the name ‘Word Me Out’ was exhibited in the Botanical park of the campus.

A four day ‘Poet to Poet Translation Workshop’ was organized by the Department of Malayalam, SNGS College Pattambi, involving a number of South Indian poets. The workshop was held in the vision of promoting amity and cultural interaction among the south indian poets, as a sequel of the one co-ordinated by Kerala Sahitya Akademy in 2017.

A total of 25 poets from Malayalam, Tamil, Kannada and Telugu shared their poems each other for a face to face translation. Some of them were Kavin Malar, Sabarinathan (Tamil), Rajendraprasad, Basavaraj (Kannada), Arunklatha (Telugu), Ammu Deepa, T.P. Vinod, Subin Ambitharayil, K. Karthik (Malayalam).

The poems for translation were exchanged through social media platforms like whatsapp and facebook, two weeks prior to the workshop. The translated poems were read out and discussed in the workshop, enabling a space for dialogue between different languages and the varied cultures. These translations were later published as a book by the college’s Malayalam Department. Such face-to-face translation workshops are highly relevant in the diverse cultural milieu of our nation. It will be helpful in the cultural integration of the nation, allowing a space to celebrate the many traditions and art forms including the marginalized streams. 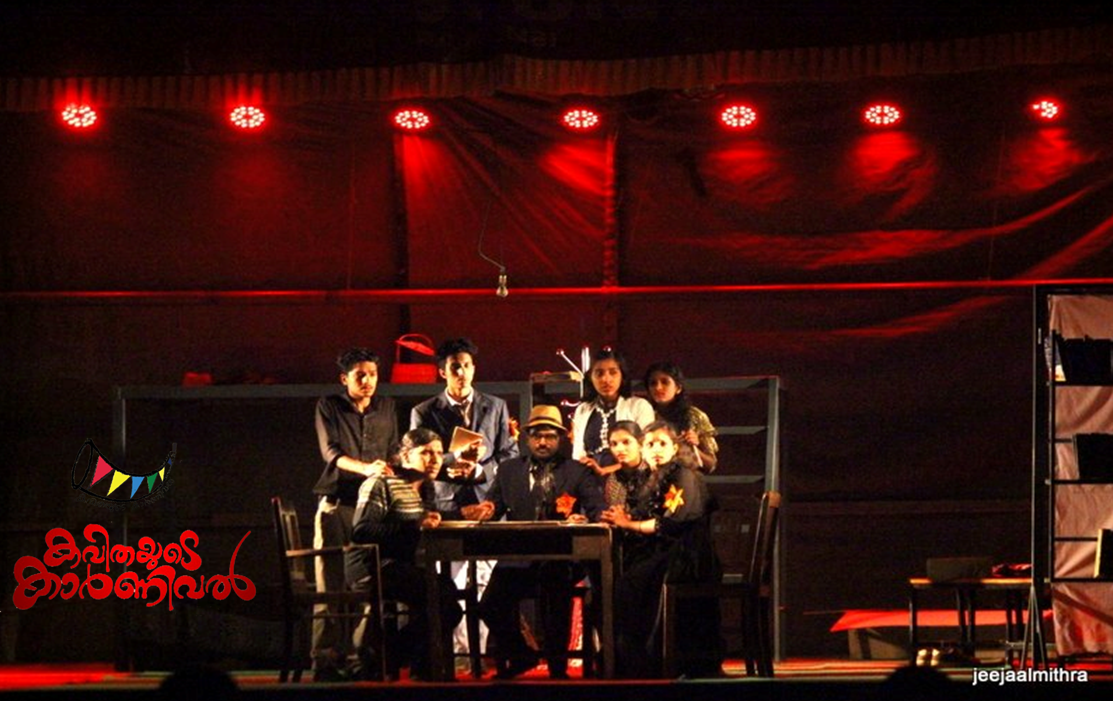 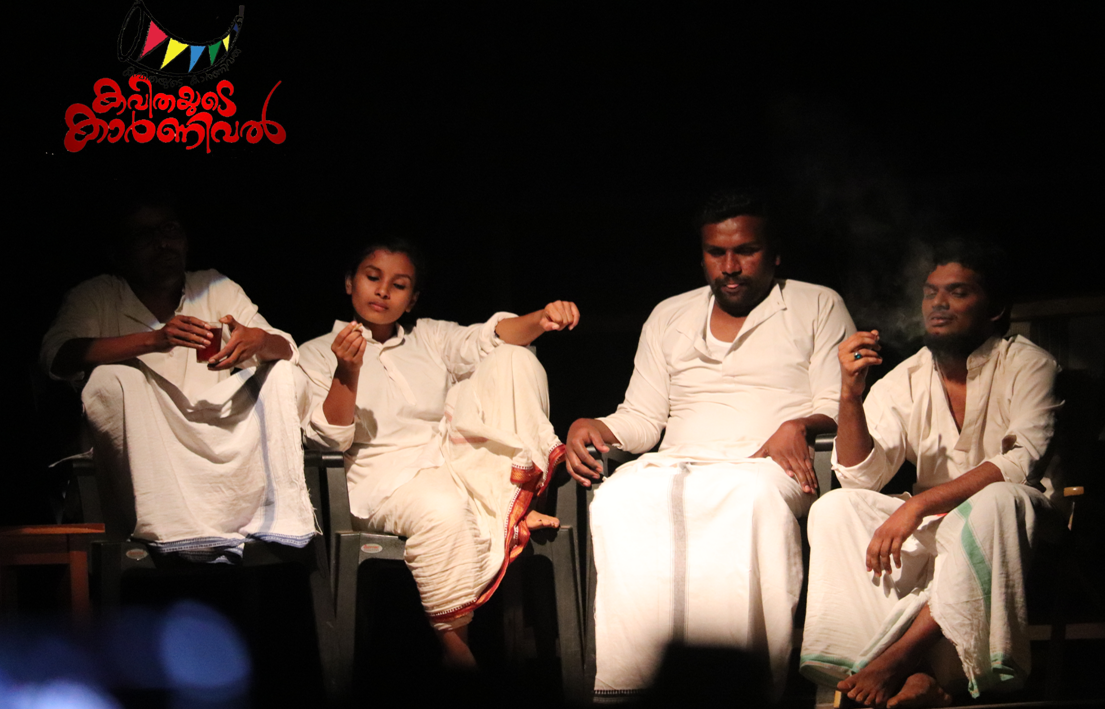 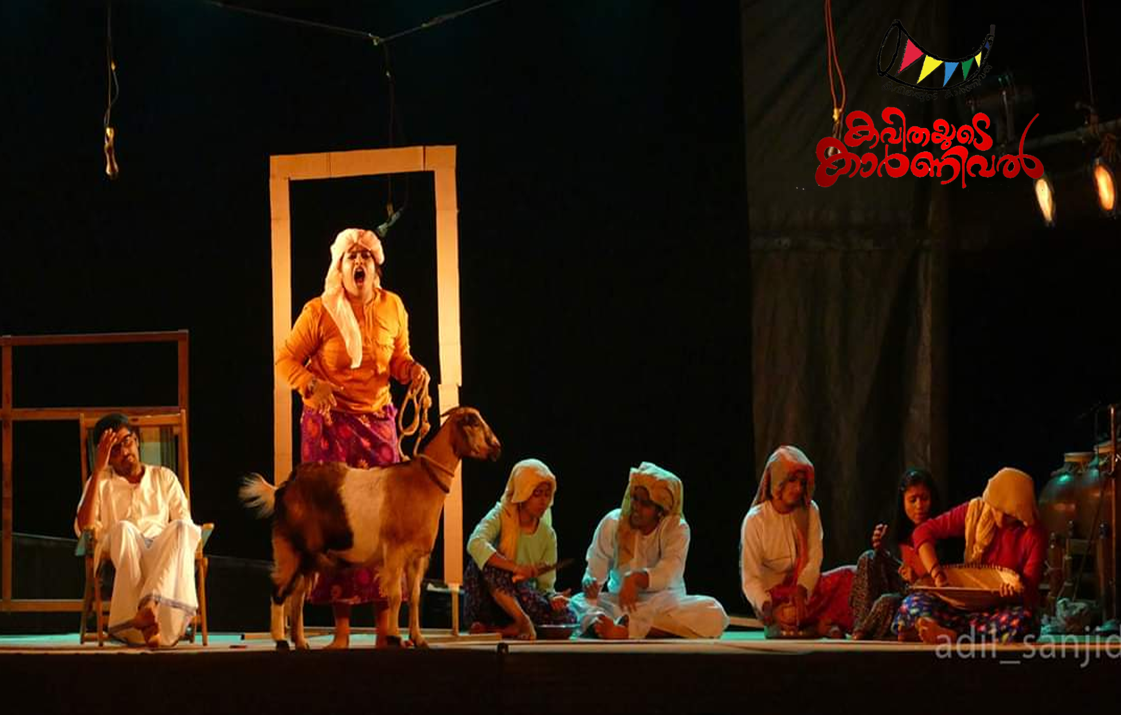 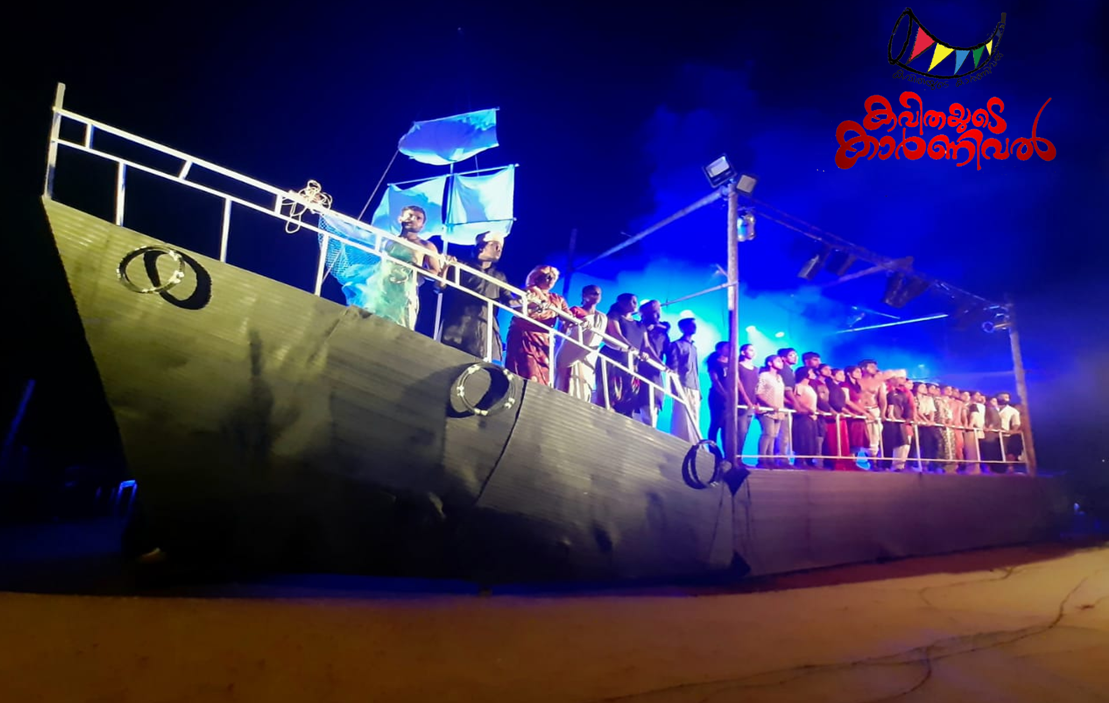 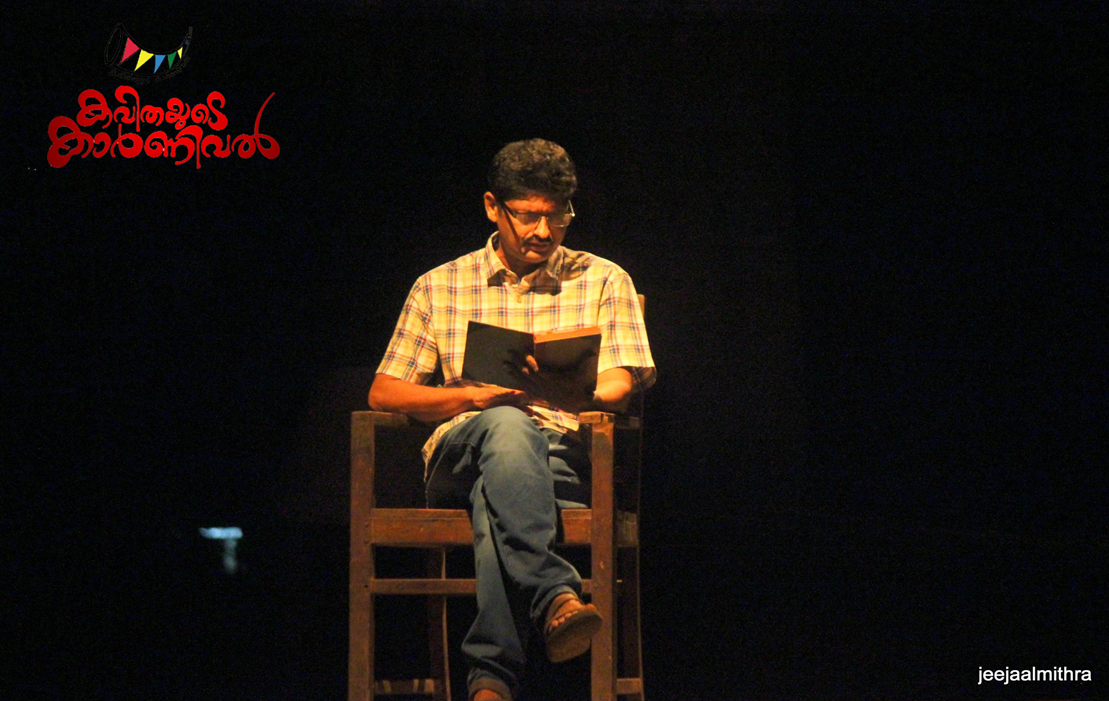 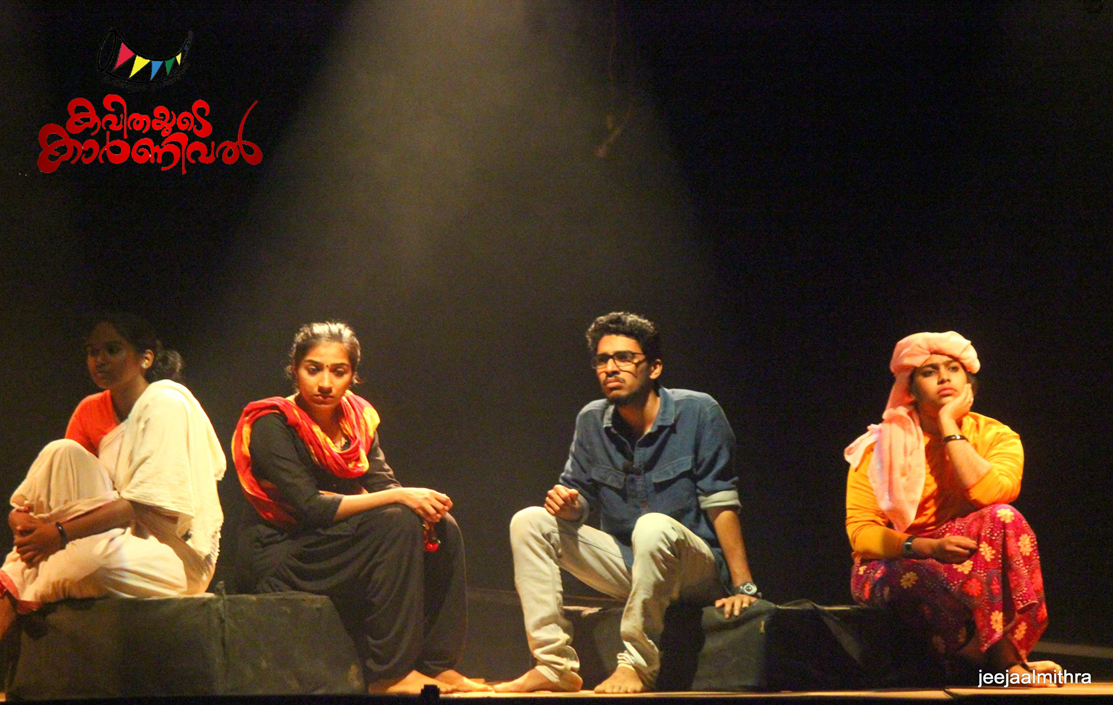 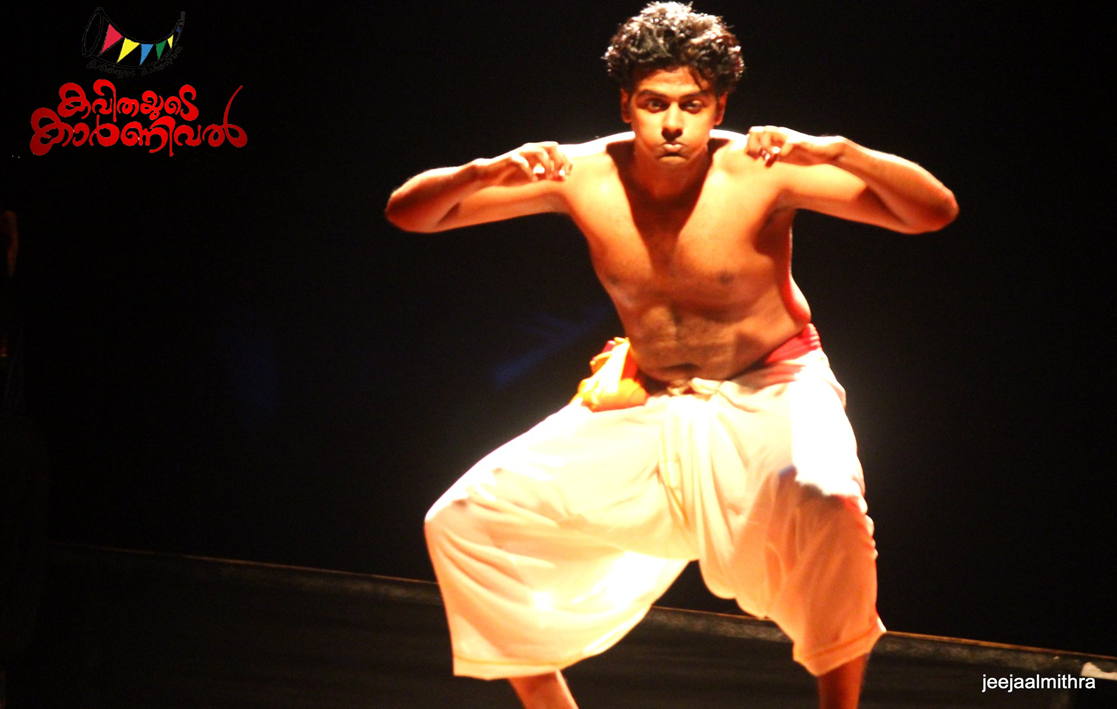 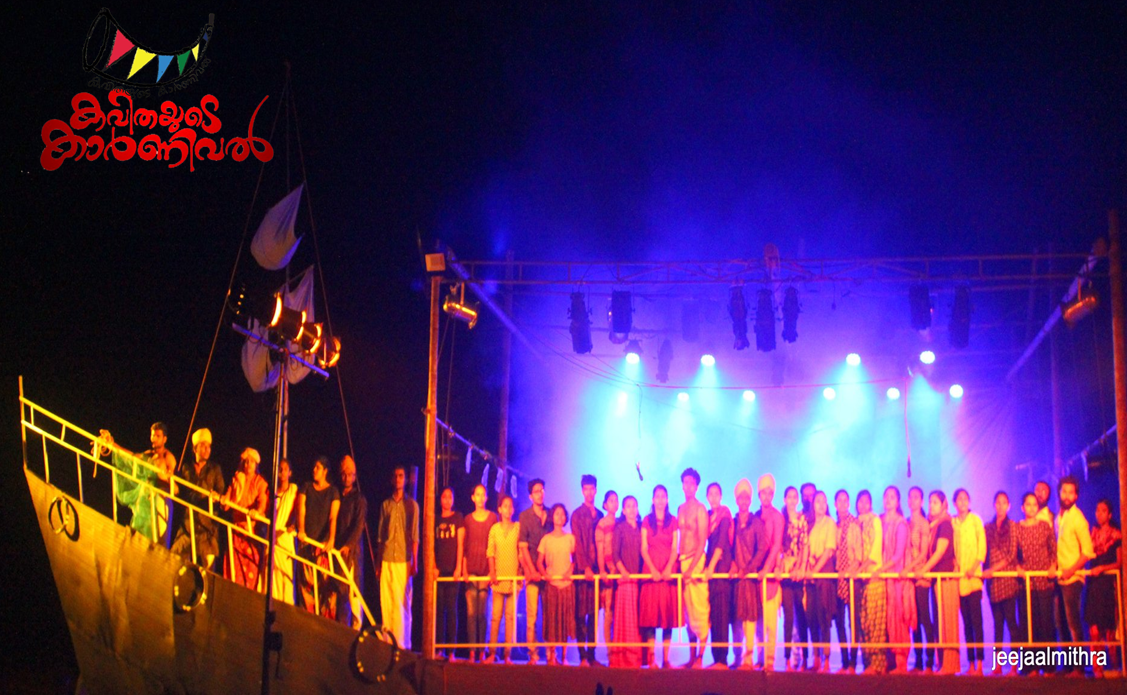 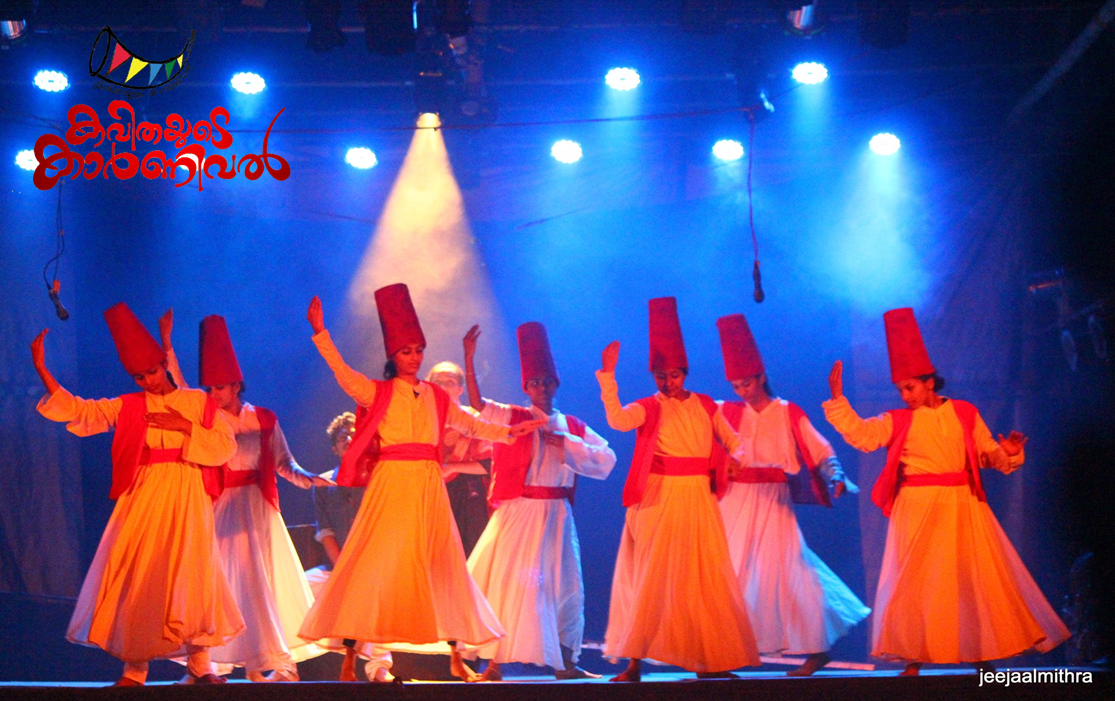